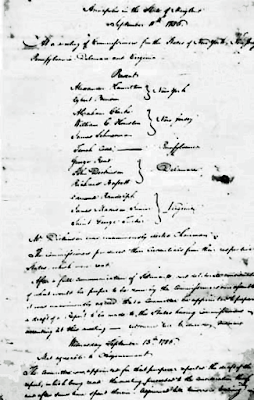 A Meeting of Commissioners to Remedy Defects of the Federal Government, was a national political convention held September 11–14, 1786 at Mann's Tavern in Annapolis, Maryland. Twelve Delegates from five states (New Jersey, New York, Pennsylvania, Delaware, and Virginia) gathered to reform United States commercial regulations due to a multitude protectionist trade barriers erected by the 13 original states under the Articles of Confederation that were stifling the national economy. Under the Articles of Confederation, the federal government was not empowered to regulate intrastate trade. Of the other eight states that did not attend, New Hampshire, Massachusetts, Rhode Island, and North Carolina appointed Commissioners but they failed to arrive in time to participate in the Annapolis Conference. Connecticut, Maryland, South Carolina, and Georgia took no action at all to appoint Commissioners.

With only five states represented, the Annapolis Convention decided that such questions of intrastate trade could not be effectively solved unless the inadequacies of the Articles of Confederation were addressed. A Commission report, drafted by Alexander Hamilton on September 14, proposed that a convention of all the states be held for that purpose. The recommendation was adopted by Congress, and a convention was scheduled to be held eight months later in Philadelphia, where the present federal Constitution was drafted. 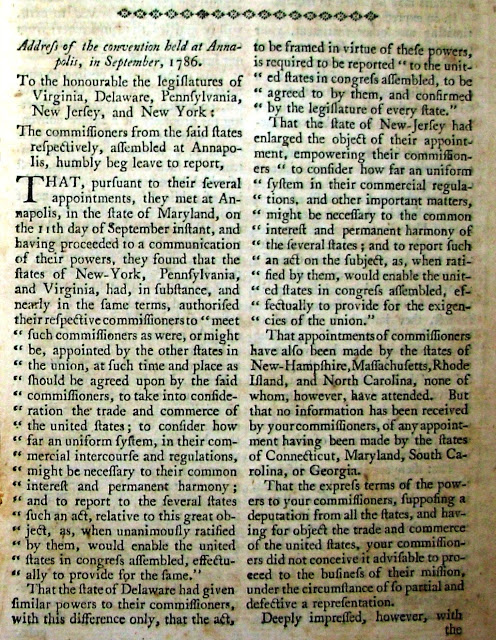 It was not until February 21, 1787 that the United States in Congress Assembled considered their committee’s report on the Annapolis Convention. James Madison wrote:

The Report of the Convention at Annapolis in September 1786 had been long under consideration of a Committee of the Congress for the last year; and was referred over to a Grand Committee of the present year. The latter Committee after considerable difficulty and discussion, agreed on a report by a majority of one only, which was made a few days ago to Congress and set down as the order for this day. The Report coincided with the opinion held at Annapolis that the Confederation needed amendments and that the proposed Convention was the most eligible means of affecting them. The objections which seemed to prevail against the recommendation of the Convention by Congress were with some. That it tended to weaken the federal authority by lending its sanction to an extra-constitutional mode of proceeding with others 2. that the interposition of Congress would be considered by the jealous as betraying an ambitious wish to get power into their hands by any plan whatever that might present itself … All agreed & owned that the federal Govt. in its existing shape was inefficient & could not last long. The members from the Southern & middle States seemed generally anxious for some republican organization of the System which wd. preserve the Union and give due energy to the Government.

The USCA formally tweaked and then approved the New York Delegation’s resolution calling for a Philadelphia Convention at Independence Hall to revise the Articles of Confederation beginning in the 2nd week of May 1787.


Resolved that in the opinion of Congress it is expedient that on the second Monday in May next a Convention of delegates who shall have been appointed by the several States be held at Philadelphia for the sole and express purpose of revising the Articles of Confederation and reporting to Congress and the several legislatures such alterations and provisions therein as shall when agreed to in Congress and confirmed by the States render the federal Constitution adequate to the exigencies of Government and the preservation of the Union.

Only Rhode Island refused to send delegates to the Philadelphia Convention for the purpose of revising the Articles of Confederation.

The Congressional Evolution of the United States of America

Presidents of the United States of America

Capitals of the United Colonies and States of America

Book a primary source exhibit and a professional speaker for your next event by contacting Historic.us today. Our Clients include many Fortune 500 companies, associations, non-profits, colleges, universities, national conventions, PR and advertising agencies. As a leading national exhibitor of primary sources, many of our clients have benefited from our historic displays that are designed to entertain and educate your target audience. Contact us to learn how you can join our "roster" of satisfied clientele today!

Primary Source exhibits are available for display in your community. The costs range from $1,000 to $35,000 depending on length of time on loan and the rarity of artifacts chosen.