Articles of Confederation: Constitution or Treaty

Articles of Confederation:  A Constitution or Treaty?

Thank you for the introduction to Kerry Sautner, who arranged our exceptional National Collegiate Honors Council tour with Mark Kehres at the National Constitution Center.  Mark is a charismatic speaker possessing an excellent grasp of the center and its interpretation of constitutional history. 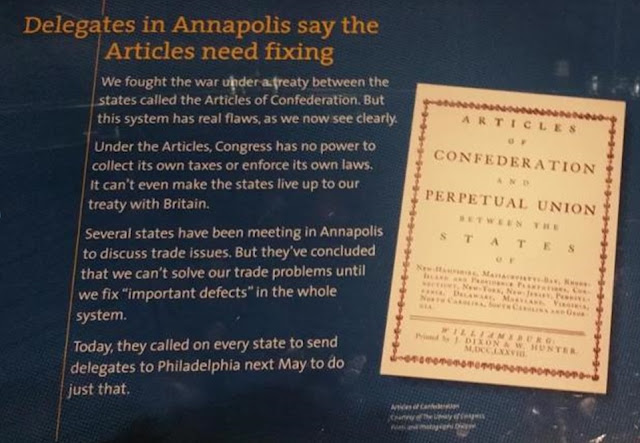 We do not understand why the National Constitution Center would purport such a position when your own online educational resource states otherwise (http://constitutioncenter.org/learn/educational-resources/historical-documents/articles-of-confederation) and the United States in Congress Assembled (USCA) resolution calling for the Philadelphia Convention states that the Articles of Confederation is a “Federal Constitution”:
Resolved that in the opinion of Congress it is expedient that on the second Monday in May next a Convention of delegates who shall have been appointed by the several States be held at Philadelphia for the sole and express purpose of revising the Articles of Confederation and reporting to Congress and the several legislatures such alterations and provisions therein as shall when agreed to in Congress and confirmed by the States render the federal Constitution adequate to the exigencies of Government and the preservation of the Union.[1] 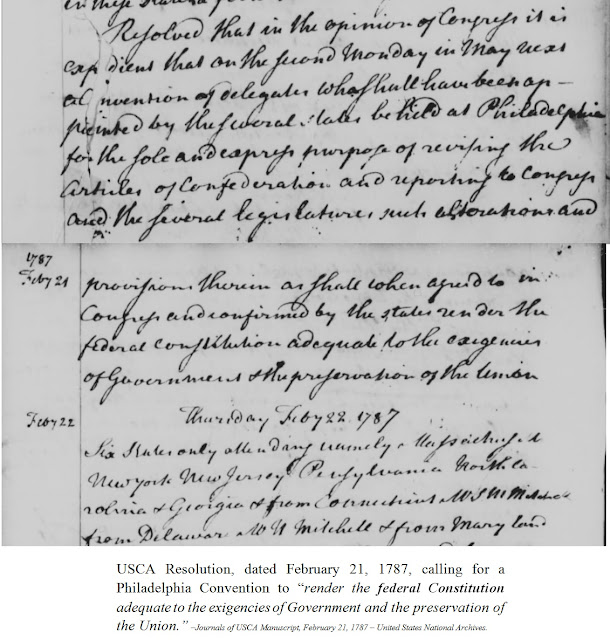 The Articles of Confederation was recognized as a federal constitution by the states, including, for example, Maryland, the last state to ratify, when, its “Act of Appointment of, And Conferring Powers in, Deputies from this State to the Federal Convention” affirmed that Maryland would join with other states “… in considering such alterations, and further provisions, as may be necessary to render the federal constitution adequate to the exigencies of the union” (emphasis added).

A requisition of Congress on the States for money is as much a law to them as their revenue Acts when passed are laws to their respective Citizens. If, for want of the faculty or means of enforcing a requisition, the law of Congress proves inefficient, does it not follow that in order to fulfill the views of the federal constitution, such a change sd. Be made as will render it efficient? Without such efficiency the end of this Constitution, which is to preserve order and justice among the members of the Union, must fail; as without a like efficiency would the end of State Constitutions, which is to preserve like order & justice among its members. [iv]

Indeed, the U.S. founding acts and laws include a resolution empowering the USCA President to reconvene the “federal government” in New Jersey after he and the Congress fled Independence Hall from mutinous United States soldiers:

There is not a satisfactory ground for expecting adequate and prompt exertions of this State for supporting the dignity of the federal government, the President … be authorized and directed to summon the members of Congress to meet on Thursday next at Trenton or Princeton, in New Jersey. [v]

These recurrent references clearly indicate that the United States in Congress Assembled, created by the Articles of Confederation, considered itself a federal congress, operating a federal government, which was empowered by a federal constitution and not a treaty.  We, therefore, respectfully request that you replace any references to the Articles of Confederation as “a treaty” to “a federal constitution.”  If you believe you cannot make this change to your verbiage clearly supported by primary source documents, please explain why your scholars have determined this U.S. Founding document to be a Treaty rather than the first constitution of the United States of America.  It does not render the Constitution of 1787 any less magnificent to recognize that its creation was prompted in part as a response to a very flawed federal constitution. 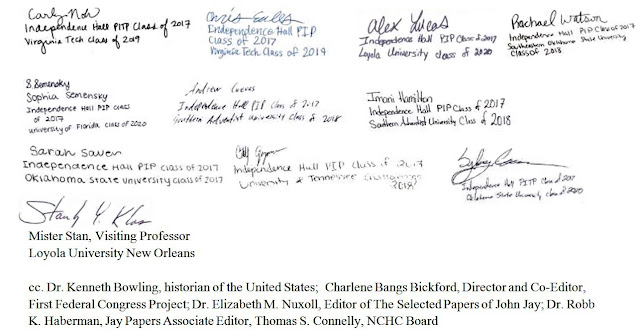 [1] United States in Congress Assembled Journals Manuscript (USCA), February 21, 1787, Resolution calling for a Philadelphia Convention to “render the federal Constitution adequate to the exigencies of Government and the preservation of the Union.” –– United States National Archives.

Thank you for your letter, and for visiting the National Constitution Center. I’ve asked Michael Gerhardt, our scholar in residence, to respond to your thoughts about our characterization of the Articles of Confederation and his response is attached. Thank you again sharing your suggestions and for visiting the NCC; if we can continue to assist you during future visits, please let us know.

As the Scholar in Residence, I wanted to respond to your January 19th letter to our President and CEO, Jeff Rosen.  We are glad that you enjoyed your National College Honors Council tour of the NCC with Mark Kehres.  We agree with your high praise of Mark.  We are lucky to have him.

We also greatly appreciate your sharing your concerns about our statement that, “We fought a war under a treaty called the Articles of Confederation.”  We’ve closely read your letter and its attachments and taken your concerns seriously.  Historical accuracy is fundamental to the National Constitution Center’s mission to enriching understanding and dialogue about the Constitution and its history.

Our review of your documents and other materials relating to the Articles of Confederation confirm our understanding that, in a technical sense, they were a treaty.  The Articles refer to themselves, in Article III, as a “firm league of friendship,” and a league was understood in both classical and the framers’ political thought as a type of treaty.  Indeed, in Federalist Number 43, this is how James Madison refers to the articles.

The language that you have quoted was initially reviewed and approved by several prominent constitutional historians, including Gordon Wood, Akhil Amar, and the late Richard Beeman.  In each of their highly respected studies of the origins of the Constitution, they refer to the Articles of Confederation as a treaty.  For example, Professor Wood, in his seminal work, refers to the articles as “less than a national constitution than a treaty among independent states.”  We understand that in other documents at the time the articles were sometimes referred to as a “constitution,” but, as we noted above, the articles do not call themselves a “constitution” but rather a “league” (which, unlike a constitution, is a subspecies of treaty).  Even if the articles were a constitution (which, we think, could be disputed), we think the point remains the same -- they were still a kind of treaty.  As Professor Beeman wrote, “The Articles of Confederation amounted to nothing more than a treaty among individual, sovereign states, and any such treaty, so long as the states retained their sovereignty, could never be the basis for a proper and durable union.”

We agree that the articles were not formally ratified until 1781.  But, that does not take away their status as a treaty.  Indeed, in Federalist 43, Madison refers to the articles as a “compact” and later writes, “A compact between independent sovereigns, founded on ordinary acts of legislative authority, can pretend to no higher validity than a league or a treaty between the parties.”  We further mention in our materials, as you note, that the articles were formally ratified in 1781.  Therefore, we think we have made its status clear in our presentations.

Please let me know if you have other questions or wish to talk further about this.  Like Jeff Rosen, Mark, and everyone else who works at the National Constitution Center, I am thrilled any time to talk with and learn from others who are as passionate about the Constitution as we are.

Thank you for taking the time to respond to our concerns so thoughtfully.  In addition to its erudite content, your letter, Professor Gerhardt, is impressive to our students as a model of respectful and engaged scholarly discourse.  I will leave aside, for now, my own thoughts, and let you know that we are using your evidence and counter-arguments as an opportunity for further historical research and close textual analysis by the students from our NCHC "Partners" Group.  Our plan is that these Honors students will then present the evidence from both sides to their Honors communities to facilitate engaged discourse and debate on these important founding documents.

As President-Elect of the National Collegiate Honors Council, I am in charge of organizing our national conference in Atlanta this November, where the students will present on their efforts and conversations.  We hope that you will not only remain in touch with us as this project progresses, but will be able to participate in a panel and dialogue with these bright and highly-motivated undergraduates.

The conference is scheduled for November 8-12.  Please let me know if this might be of interest, and thank you again for your response.  The National Constitution Center is an outstanding resource, and we are honored by our conversation with you.

The Loyola University Honors Community: Scholars for Justice in the Heart of New Orleans

Capitals of the United Colonies and States of America